Toggle menu
We continue to experience delays due to COVID 19:
Alert: USPS is experiencing unprecedented volume increases and limited employee availability due to the impacts of COVID-19. We appreciate your patience.

Product Number: 32545
UPC: 4950344325450
Manufacturer: Tamiya Paints
Category: Models
Scale: 17533
Description:
1/48 Russian KV-1B w/Applique Armor
Tamiya announces the release of the up-armored KV-1B in our ever-growing 1/48 MM Series. Display it with the previously released KV-1 to show the differences between the two, line it up with our other Russian vehicles like the T-34 and GAZ-67B, or pit it against its German adversaries like the Tiger I and Panther in battle dioramas. About the KV-1BArmed with a powerful 76.2mm main gun and equipped with 75mm frontal armor, the KV-1 tank was an unpleasant surprise for the German army when they invaded Russia in the summer of 1941. Impervious to nearly all anti-tank guns, the KV-1 proved to be a formidable opponent, but the introduction of newer, more powerful German tanks lessened its advantage as the war went on. In response, additional armor plates were bolted onto the hull and turret to increase protection, resulting in the KV-1B variant. About the Model*High quality 1/48 scale assembly model kit of the KV-1B heavy tank. *Diecast chassis for added weight and realism. *Applique armor for turret and hull accurately reproduced complete with bolt details. *Turret hatch can be modeled in both opened and closed positions. *Tank treads are assembly type, with the upper section featuring realistic sag effect. *3 types of markings included (tentative). 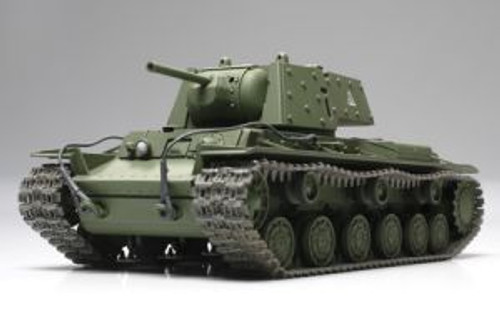